ExaGrid Systems is the only company that implemented deduplication in a way that fixes all the challenges of backup storage. ExaGrid’s unique landing zone and scale-out architecture provides the fastest backup—resulting in the shortest fixed backup window, the fastest local restores, fastest offsite tape copies and instant VM recoveries while permanently fixing the backup window length, all with reduced cost up front and over time. Learn how to take the stress out of backup at www.exagrid.com or connect with us on LinkedIn. Read how ExaGrid customers fixed their backup forever.

ExaGrid’s disk backup with deduplication system is the only solution purpose-built for :  backup, optimized for scalability, performance, & price.

Overview - The ExaGrid appliance product line consists of 10 appliances. Each appliance is sized for a full backup and for long-term retention.

Any appliance can be mixed and matched in the same scale-out GRID with any other appliance, which allows customers to buy what they need as they need it. Up to 25 appliances can be combined in a single GRID, and the largest GRID can take in an 800TB full backup.

All appliance and GRIDs are managed by a single user interface. Multiple GRIDs can be deployed in a single site which allows for full backups up to petabytes.

ExaGrid offers 10 appliance models that can be mixed and matched with up to 25 appliances in a single scale-out GRID. The largest scale-out GRID can take in an 800TB full backup with an ingest rate of over 187.5TB/hr. 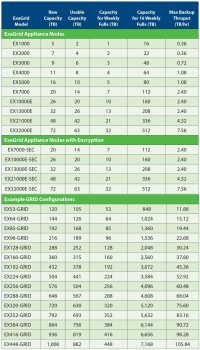 High Performance Disk-Based Backup with Data Deduplication ExaGrid’s disk backup with deduplication system is the only solution purpose-built for backup that leverages a unique architecture optimized for scalability, performance, and price. The system scales as needed by adding ExaGrid appliances, which virtualize into a GRID architecture automatically, adding capacity and processing power while acting and being managed as one unified system.

ExaGrid disk-based backup appliances include GRID computing software, which virtualizes them into a single pool of long-term capacity. Capacity load balancing of all data across servers is automatic, and multiple GRID systems can be combined for a total logical backup capacity of more than 12PB. Only with ExaGrid’s full server in a GRID architecture and adaptive deduplication do you get:

Since backups write directly into the landing zone, the most recent backups are in their full undeduplicated form ready for any request. Local restores, instant VM recoveries, audit copies, tape copies, and all other requests do not require rehydration and are as fast disk. As an example, instant VM recoveries occur in seconds to minutes versus hours for the inline deduplication approach.

ExaGrid provides full appliances (processor, memory, bandwidth, and disk) in a scale-out GRID. As data grows, all resources are added including additional landing zone, additional bandwidth, processor, and memory as well as disk capacity. The backup window stays fixed in length regardless of data growth, which eliminates expensive forklift upgrades. Unlike the inline, scale-up approach where you need to guess at which sized front-end controller is required, the ExaGrid approach allows you to simply pay as you grow by adding the appropriate sized appliances as your data grows. ExaGrid has 10 appliance models and any size appliance or any age appliance can be mixed and matched in a single GRID, which allows for IT departments to buy compute and capacity as they need it. This approach also eliminates product obsolescence. ExaGrid is a scalable, cost-effective disk-based backup with deduplication solution that revolutionizes how organizations back up and protect their data.

Our patented zone-level deduplication reduces the disk space needed by a range of 10:1 to 50:1 by storing only the unique bytes across backups instead of redundant data. Adaptive deduplication performs deduplication and replication in parallel with backups while providing full system resources to the backups for the shortest backup window. Adaptive deduplication delivers the fastest backups, and as your data grows, only ExaGrid avoids expanding backup windows by adding full appliances in a GRID. ExaGrid’s unique landing zone keeps a full copy of the most recent backup on disk, delivering the fastest restores, instant VM recovery, “Instant DR,” and fast tape copy. And, as data grows, ExaGrid saves you 50% in total system costs compared to competitive solutions by avoiding costly “forklift” upgrades.