Promark Technology is a premier high-touch, value-added distributor (VAD) in the United States. Promark Technology’s core focus is distributing data storage and virtualization solutions through a two-tier distribution channel selling to value added resellers (VARs) and system integrators. We leverage our direct relationships with world-class technology partners to provide solutions that meet the most demanding needs of our customers. Promark also provides various federal and state contract vehicles including the GSA Schedule for which its channel partners can leverage to sell to the federal government. Promark’s Professional Services Division provides VARs the opportunity to offer their clients installation, implementation and support services for many of our vendors. Promark offers a channel-friendly model with a solid margin proposition for your organization to make money for service opportunities. Promark offers professional services in application integration, backup and recovery, network optimization, storage implementations and disaster-recovery solutions.

Our company prides itself on its customer satisfaction by providing a high-touch atmosphere and bringing value to its partners. Whether it is Marketing, Professional Services, Infrastructure sales, or its GSA Schedule — Promark understand how to help its customers grow their business! 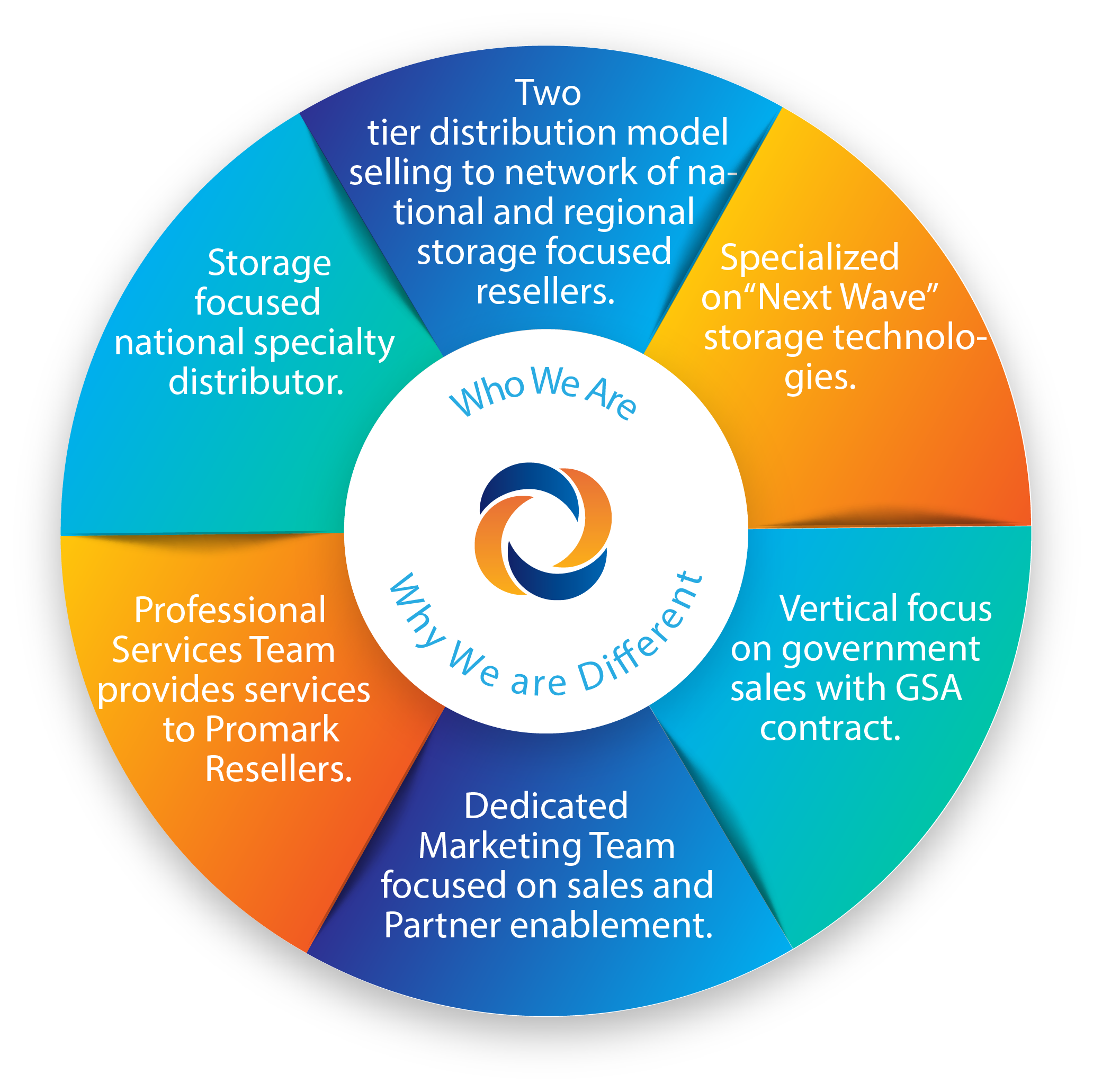 Promark Technology was established in the late 1980s as a Regional Value added distributor focused in the Mid-Atlantic region selling document imaging hardware and software.

Throughout the 1990s Promark continued adding vendor lines to its portfolio and entered the storage market by signing Exabyte Inc. and its product line of 8mm tape drives and libraries. Promark applied for and was awarded a 2 tier GSA schedule in September of 1996. This contract was the first of its kind and allowed Promark to sign vendors to its GSA schedule and authorize Value Added Resellers to use the schedule as their own contract. Promark starts expanding into other regions in the late 1990s and added multiple vendors to its GSA schedule.

Promark Gets Acquired by Ingram Micro

In the early 2000 Promark became a national distributor with sales teams calling on resellers throughout the United States that sold document imaging and storage products in the commercial and public sector markets. Promark Technology always maintained a 2-tier structure of selling through a network  of value added resellers. Promark grew rapidly doubling in size approximately every 4 years. Promark signed Lefthand Networks in 2006, catapulting Promark into the national scene and allowing it to add additional sales teams, professional services and support. Promark Technology was acquired by international distributor Ingram Micro in 2012.

RES Software is proud to work with Promark. Promark has proven to deliver quality service and expertise on behalf of the vendors that they support. Our reseller partners have been impressed by the support they get from Promark and are happy with our partnership.

"Promark's distribution model is unlike any other."

"Promark: a positive influence to business!"

Working with Promark Technology has been positive for our business. Now that they are part of Ingram Micro we get both the specialized, personal touch from Promark with the reach of products provided by Ingram Micro. It’s great to have single point of contact to service all of our needs.

Promark’s niche in the storage distribution market has been a great fit for System Source over the 10-plus years of our relationship.  We value Promark’s small-company feel in terms of customer service and long term relationships with the long-tenured sales team.  The Ingram Micro relationship has added additional breadth of products while keeping our Promark relationship intact.

"Thanks Promark for a valued partnership."

As one of the large National Resellers that offers a wide array of manufacturer products and solutions, it is critical to have valued partnerships to help navigate through all the necessary resources needed for our customers.  Promark is that valued partner for SHI.  We can always rely on Promark for speedy, accurate and helpful responses to our daily needs.  Thanks Promark for a valued partnership.

Promark is amazing! The sales team provides top-notch support and they are well-versed on the technology side.